Comfortable pro-choice people: can we just not talk about the "killing babies" part? 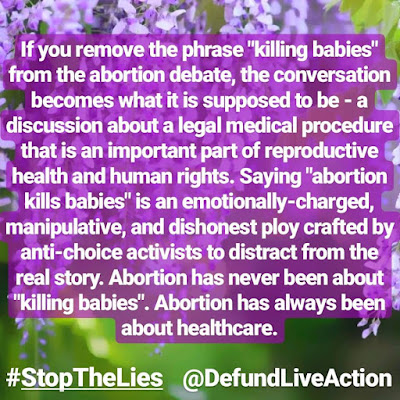 I can see an argument for avoiding the word "baby" while discussing abortion, but this post is more like "Can we just not discuss the other organism involved in this controversy at all? Can we please only use the euphemisms that keep me comfortable?" This kind of clingy vision tunnel version of pro-choice thought inspired the speech I did a couple weeks ago about "the comfortable pro-choice people."

Not all pro-choice people do this. Plenty will own the fact that abortion kills humans and move to discussions of bodily rights or more nuanced discussions of fetal personhood. In particular, abortion providers don't have the luxury of the above meme's ridiculous dishonesty. They have to actually work with the blood and body parts. A couple months ago I came across the 2017 paper "Dangertalk: Voices of abortion providers." One of the central themes of the piece was the chasm between pro-choice rhetoric and abortion provider experiences. Providers often feel they can't be honest about their experiences or various emotions about their work because it would undermine the pro-choice narrative. But when they are free to be blunt, as in this piece, many (not all) providers talk quite frankly about how abortion absolutely is killing. Excerpts:


From my perspective, elements of the pro-choice side are trying harder all the time to re-frame abortion away from any discussion of fetal death and on to the woman and only the woman. I don't believe that strategy will ever really succeed, because they can't change the reality that human organisms are destroyed in abortion--that's the point of abortion. We've seen that in recent arguments about late-term abortion, where some abortion rights advocates argue women should have the right to destroy even healthy, viable fetuses for no medical reason (see #7 in 8 common pro-choice claims about late-term abortion). As Kelsey put it in her recent NY Daily News op-ed:

Those who insist abortion has nothing to do with killing are kidding themselves. And every time they do, it underscores to me how difficult it must be for most people to be pro-choice with eyes wide open.
Posted by M at 1:48 PM