How #ShoutYourAbortion Changed My Mind 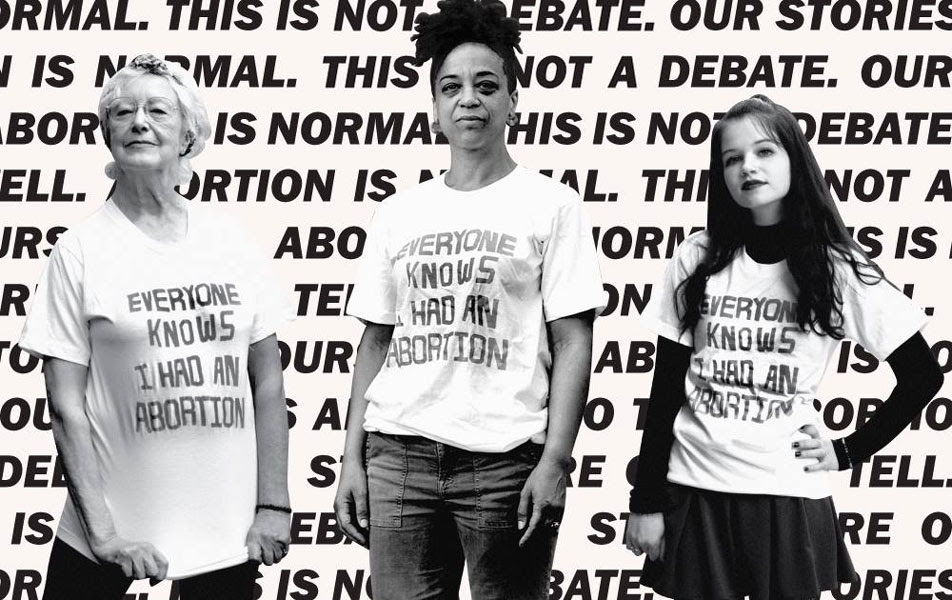 I was raised pro-life. My parents were so passionate about the cause, in fact, that when my four brothers and I got old enough to drive, any new car had to be fitted with a pro-life bumper sticker or it wasn’t allowed on their property. All through childhood, I never questioned this idea. It seemed self-evident that everyone should have the right to not be killed—most especially helpless babies. The notion that the tiniest and most helpless among us should prove the single exception seemed absurd.

In my late teens, though, I started doubting the faith I was raised with and subsequently, the value structures it carried—including the supposed implicit value of the unborn life. The pro-life stance, like many other views I’d inherited, was not as simple as I’d thought. Through experiences of my friends and also articles written about the plights of women across the globe, I learned to stop condemning women in desperate circumstances. They already had plenty of that. What these women needed was compassion. No one wanted an abortion, I realized. Some situations simply have no good solution. I decided that the way forward was through helping people make the decisions they deem best for themselves, not by foisting my own moral code onto their backs. For over ten years, even after having two kids of my own, there was absolutely no doubt in my mind: the pro-choice movement was on the right side of history.

The internet flooded over with stories, not of downtrodden women facing impossible circumstances, but of regular women, just like me, killing the growing embryos/fetuses inside them because they just didn’t feel like being pregnant. At first, I assumed these stories were made up—that they were actually pro-life radicals masquerading as post-abortive women, to make the pro-choice camp appear to be fueled by vacuous narcissism rather than high-minded ideals.

I pored over story after story told by women in my own demographic who got pregnant, sometimes through birth control failure, sometimes because birth control had seemed too big a bother at the time. There were a few stories I would have expected to see: people in dire straits with no easy “right” solution. Far more common, though, were stories with the same punchline: abortion—for anyone and for any reason—is simply a part of women’s healthcare. Specific reasons were incidental. The incidental nature of reasons actually seemed to be the point.

According to the new narrative being shaped, the very notion that people should have to justify their choice was problematic because it suggested that the fetus, itself, mattered in some way. In fact, terms like fetus or embryo weren’t even used (probably because they suggest a being, however primitive, existing beyond the mother). Almost exclusively, the human embryo or fetus was referred to as simply “the pregnancy.” A very clever linguistic turn, especially if you believe, as I do, that our ability to think is restricted by the words we use.

It seemed the pro-choice movement had officially moved on from mantras like “safe, legal, and rare.” If abortion is a humane service (so went the new argument), why on earth should it be rare? My side—the side which recognized that sometimes the best solution available is the least-bad of a host of terrible ones—had abandoned all pretense of engaging with the harsh ambiguities of life. Now, abortion was just good. Full stop.

I’d thought #ShoutYourAbortion would alienate other pro-choice people, but no one else seemed fazed. I started to wonder whether the pro-choice side had actually moved at all. Maybe they just finally felt free to express their views openly. Maybe I was just one of a handful of naive people on the pro-choice side who’d actually believed the earlier, feel-good narrative. Maybe, for all my belief that I was on the side of compassion and justice, all I’d really been was the pawn of an ideology which left no room for conviction that our lives have any inherent value.

For the first time, I felt utterly unqualified to make any definitive claims on the subject of abortion. Yet I needed to. In some way that I couldn’t understand, I knew this specific culture clash was rooted in something bigger.

I had to start somewhere, and I figured looking at my local culture (I live in the United States) was as good a place as any. From its inception, this country was united by a novel concept based around the ideas of John Locke: that all of mankind was created equal—that everyone had the right to their own life and destiny—because among equals, no one can rightfully render the life or will of another subservient to their own. We were never united by any specific belief system, but the dogged belief that the individual transcends even belief systems.

It sounds pretty great, but of course, it was never actually put into practice. From the genocide of Native American populations (obvious to any non-frontiersman), to the manifest injustice of slavery (obvious to any non-slaveholder), and countless other stains on our national conscience, we keep falling into the same trap over and over again.

I’d thought that people just couldn’t allow themselves to see human rights violations when their own livelihoods depended upon those violations. But the problem was so much more insidious than that. I don’t think it’s actually that hard for most of us, when directly faced with own hypocrisy, to admit that what we’re doing is wrong. What we can’t confront is the structural injustices our own tribe depends upon.

This is the difference between taking a good hard look in the mirror, versus walking up to your neighbor, brother, sister, your closest of friends, holding up this mirror to them, and saying: “Look! This is what you really are. You, who’ve brought me soup and bread every time my family fell on hard times, were only in a position to share your wealth because you’re propped up by the labor of your slaves!” Or “Son! You think you’re out there, on the edge of the frontier, risking your life to protect your family from savages, but let me tell you the truth! Those are innocent people—people just like you and me—and they were here first! They’re just defending themselves and what it rightfully theirs! You, son, are no hero. You are the savage.” How could any parent say this? Especially if they had already lost another son, as many had, in the service of that same cause?

Here is the dark, seedy underbelly of the beautiful, loyal, deeply social nature of the human psyche. Before anything, even our most sacred beliefs, come those people we love. Condemning them goes against our very deepest intuitions. This is how injustice to the Other is propagated again and again and again. Because, while our most cherished doctrines teach us that all humans are people with inalienable rights, our hearts only bind us to some of them. Our love for some effectively blinds us to existential reality of others. And there are very good reasons for this. But when this trait is exploited and deployed on a societal scale, the effects are disastrous.

This is at the heart of liberal Americans’ support of abortion rights for women. How could we acknowledge that many of our close friends killed their own children in the name of convenience? Only a monster could kill their own child. And our friends have proven themselves to be good, kind people. People who have been there for us when we needed them. How could we ever acknowledge a truth which would render them monsters—when we know, on as deep a level as we know anything, that our friends are not monsters?

And so they did not kill their child, we say. And they do not ever wish to do such a thing. What they want is simply control over their own body. We shove our cognitive dissonance down, telling ourselves stories of how a pregnancy involves only the woman—that even if there is some other human involved, that it doesn’t count. We say that it’s okay because in their early stages, humans almost certainly can’t experience much—not even pain. Yet we’re simultaneously outraged over the idea that killing a human in any other circumstance could be justified if only it was painless. We tell ourselves that the embryo or fetus has nowhere near the developmental capacity which renders human beings special, furiously stamping down the realization that this argument equally justifies infanticide.

I find myself more and more convinced that this is not a religious issue, and that it never really was. No mainstream religion has ever solved the myriad conflicts of interest that arise from people pursuing conflicting goals, or people who want to use other people as mere tools for their own end, or people who don’t want to be shackled to the tiny human who (for at least a little while) can’t survive without them. I know that people see this as a religious issue. But why? Why should it be necessary to believe each of us possesses a soul in order to oppose abortion?

If anything, belief in the soul acts as consolation in the case of abortion. If there is no immortal soul, whenever someone’s life is stripped away, this loss is permanent. All the potential of a unique, singular human being gets snuffed out—not merely relegated to place beyond this world—but finally, utterly, destroyed. I can’t imagine any moral weight heavier than that.

I think no one else in the pro-choice camp was bothered by the #ShoutYourAbortion movement because, subconsciously, they’d long ago realized the only sustainable way to support abortion on demand is to assume there’s no person being obliterated. No person, no loss. Just a woman and her uterus. Once people have taken that idea firmly onboard, of course, of course, this new movement couldn’t be seen as horrific.

What is required here is imagination. The ability to honestly face conflicts of interest for what they are. The ability to say to our friend who finds herself tied to a human of her own (possibly unwitting) creation, “I am here with you. You are strong enough to do this.” We do not need to feel love toward the unborn, or anyone else who is being “othered” in order to defend their right to not be killed. All we need is to recognize that, intrinsic to their being, is the potential to love and be loved—that no one, not even those we love most, has a monopoly on that.

We must figure out a way, as a society, for all of us to finally count as people. It’s a hell of a thing to ask of ourselves; anyone who thinks otherwise hasn’t thought enough. But I believe we’re capable of creating such a reality. I don’t know the precise path that will get us there. But I do know this: seeing ourselves as a potential force for good—and recognizing this potential also lives inside the youngest of us—will get us a hell of a lot farther than, say, shouting our abortions.

[Today's guest post by Laura Elkins is part of our paid blogging program.]

Posted by secularprolife.org at 7:58 AM

Email ThisBlogThis!Share to TwitterShare to FacebookShare to Pinterest
Labels: her story, pro-abortion