Whose Body Is It, Anyway?

There's an argument I see pretty often by pro-life people that completely misses the point of the pro-choice objection. It is represented in the following meme: 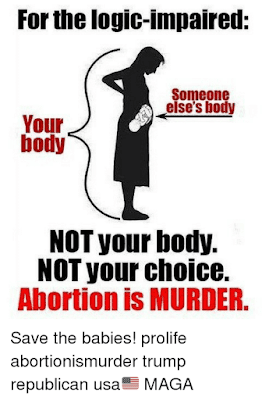 Now, the irony here is that whoever made the image is making a logical mistake while accusing pro-choice people of being "logic-impaired". They have erected a strawman to attack rather than attacking the actual argument.

Now, I have encountered pro-choice people who are ignorant of the science of human reproduction. But when someone is making a bodily rights argument, that's not the argument they're making. There are at least four things a person who says "it's my body" might actually mean, which is why it's so important to ask a clarification question of that person to make sure you are responding to their actual argument and not attacking a strawman, as in this meme. These four things might possibly be:
This meme assumes that the second kind of argument is always being made. The argument "the fetus is my body, therefore I can have an abortion if I want to" is the specific argument that this meme responds to. However, of all four of these arguments, the second argument is the rarest one. I've encountered a number of people who don't think the unborn entity is a human being. They think it is merely a clump of cells, but they don't think it's a clump of cells that are literally a part of their body, like an appendage. More often, they think of the unborn entity as an intruder, as a rapist or a parasite. Something that is unwanted occupying their womb. That is why they have the abortion in the first place.

So yes, it's theoretically possible you may encounter someone making the second argument. But that kind of person is an absolute rarity. While I've encountered a couple of people who made the first, the latter two arguments are the ones you are most likely going to hear. If someone makes one of the former two arguments, all it takes is a brief bit of education to let them know why their understanding of human reproduction is mistaken. Then they'll usually realize their argument is bad and take refuge in one of the stronger bodily rights arguments, anyway. Sharing a meme like this (and making the argument in the meme) is just going to reinforce the pro-choice opinion that pro-life people don't have good arguments for their position.

Edit: Timothy Brahm of Equal Rights Institute wrote a similar piece a couple of years ago called Fellow Pro-Lifers: Please Stop Sharing This Strawman Meme, in which he goes into greater detail about why we should avoid sharing it.

Posted by Clinton Wilcox at 7:58 AM