Most people who identify as pro-life are advocates of legal restrictions on abortion. But there are some also who actively oppose abortion, yet do not want it to be outlawed, or at least do not want to make any efforts to outlaw it; their focus is on cultural attitude changes made possible mainly by better support for women, sometimes accompanied by promotion of certain kinds of birth control. Within each of those groups there is another spectrum as well: some oppose capital punishment and most war, and normally support universal healthcare, and call themselves consistently pro-life, while in others, anti-abortion advocacy is accompanied by more conservative political positions. But the distinction I would like to focus on here is that between the “legal” pro-lifers and the “cultural” pro-lifers. 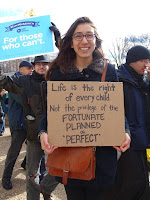 I consider the “legal” pro-lifers and the “cultural” pro-lifers to be all on the same team. And it may even be best that different players on that one team have their different roles. It may be best for there to be both “tough cops” and “soft cops,” working in harmony. I think all the inputs of all the organizations that pursue only one goal or the other, or pursue any balance between the two goals, should be welcome on the team. But what I would like to argue here is that we will never achieve the maximum possible success against abortion without trying hard to enact laws; and that in fact we may never even make much progress on the cultural front until abortion is illegal. I would like to argue against the idea that efforts to create better conditions for women (even if those efforts are combined with the promotion of certain kinds of birth control) are enough, or that even all such efforts combined with moral suasion are enough. (Moral suasion through scientific and philosophical education is part of the toolkit of nearly all pro-lifers.)

Suppose for instance that whenever a single woman or a couple decide to give life to and raise their baby, in exchange the government gives them a free car and a nice free apartment. The abortion rate will certainly decline. But suppose that the next year the economy worsens and the government discontinues the program. Couples will go back to baby-killing as usual, because their valuation of the unborn had not changed. They had given life because it was convenient to do so. Their consciousness about unborn life had not changed. Abortion had become situationally unnecessary for a year, but couples had not learned to perceive the unborn (at any stage of development) as full-fledged members of their family, and society had not learned that the unborn (at any stage) are our little sisters and brothers, whose protection is an imperative for us.

Unborn child-protection laws, on the other hand, send a moral message that we are going to stop treating unborn children, in our legal system, as less valuable than born children. They thus humanize the unborn. They don’t leave a hole in our institutions where the humanity of the unborn should be. (Laws can perform these functions adequately by targeting only abortionists and abortion pill vendors, by the way; it should be possible to avoid targeting pregnant women.)

Laws importantly influence culture, just as culture influences laws. If we are not continually and actively demanding legal protections for unborn persons similar to those we would demand for born persons, we will appear to believe that the unborn are not really persons, which will undermine even our efforts at moral suasion.

Rebecca Haschke does pro-life outreach on college campuses. In a Life Report video, she said:


I’ve talked to students on campus, though, when we talk about abortion – their reasoning for why abortion is okay is because the law says it’s okay. And I ask them, “Should the law be what determines what is right and wrong?,” and they'll be like “Well, yeah, it does.” And then I cringe and I say, “Well, have we ever had laws that have been unjust?” And then they go, “Yeah, we have.” [But] the law . . . influences people’s thoughts.

In 2005, the Los Angeles Times interviewed patients at an abortion center: “She regrets having to pay $750 for the abortion, but Amanda says she does not doubt her decision. ‘It's not like it's illegal. It's not like I'm doing anything wrong,’ she says.”


The basis for the [pro-life] moral position is that it is the taking of a human life. In other arenas in society where the taking of a human life is concerned, the law also enters. If it doesn’t enter, that is the anomaly, that's the strange thing! So the very basis for the moral position leads. . . . I'm not saying the legal struggle will solve everything. The moral and legal have to go in tandem.

To fail to advocate unborn child-protection laws is to countenance an anomaly, and thus to say that unborn children are not as good as born children. When the Virginia Supreme Court said in 1858, “in the eyes of the law . . . the slave is not a person,” that august pronouncement must have helped crystallize many people’s perceptions of slaves – certainly at least the perceptions of those who wanted to believe it. The pedagogical effect of law is well-known.

Actions proceed from thoughts, so consciousness is key to any kind of social change; and moreover, I think that the upgrade of consciousness involved in recognizing the unborn as full-fledged members of our human family, crossing that last and hardest frontier of civil rights, will have ramifying effects in upgrading morality in all areas of life.

Posted by secularprolife.org at 8:12 AM