Last week, The Atlantic published an article by Caitlin Flanagan entitled "The Dishonesty of the Abortion Debate: Why we need to face the best arguments from the other side." I encourage you to read the whole thing. Flanagan, who is pro-choice, did an admirable job of identifying the best arguments on each side of the abortion debate.

For the pro-life side, she gave a heartfelt defense of children in the womb. While there are many other ways to arrive at the pro-life position—such as abortion's harm to mothers, fathers, abortion survivors, people with disabilities, and society at large—I agree that the harm to the unborn child is paramount. And boy, does she write it well. No one can accuse her of failing to understand the opposing position:


What I can’t face about abortion is the reality of it: that these are human beings, the most vulnerable among us, and we have no care for them. How terrible to know that in the space of an hour, a baby could be alive—his heart beating, his kidneys creating the urine that becomes the amniotic fluid of his safe home—and then be dead, his heart stopped, his body soon to be discarded.

For the pro-choice side, she selected the fear of "back-alley" abortion as the strongest argument. This is apparently the argument that most convinces her personally. She tells the tragic stories of three mothers in the 1950's who died after attempting to abort their babies with Lysol (which had a different formula than it does today). She concludes:


Women have been willing to risk death to get an abortion. When we made abortion legal, we decided we weren’t going to let that happen anymore. We were not going to let one more woman arrive at a hospital with her organs rotting inside of her. We accepted that we might lose that growing baby, but we were not also going to lose that woman.

It's the best available argument for abortion. And it's wrong, for at least three reasons.

Flanagan assumes that making abortion legal made it safer, but doesn't offer any evidence for that assumption beyond a correlation-is-causation argument; since women are no longer showing up in hospitals after surreptitious Lysol abortions, Roe must have been the answer! That's a weak case, and the data just don't back it up.

Whenever I give presentations on college campuses, I share this graph from the National Center for Health Statistics, showing maternal deaths from illegal abortions by year—but with the x-axis, the year, erased. 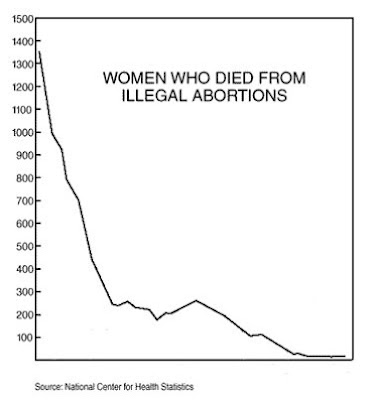 I then ask a brave audience volunteer to guess where 1973, the year of Roe v. Wade, falls on the graph. Most select a peak, in line with the narrative that Roe v. Wade caused maternal deaths to plummet. Invariably, they guess wrong:

Roe v. Wade isn't even a blip on the graph. Forget "correlation doesn't equal causation"—they don't even have correlation! The real savior of women's lives? Advances in antibiotics.

And not just antibiotics. Flanagan herself acknowledges that it "was illegal to advertise contraception nationally until 1977," four years after Roe; today, you can pick up condoms at any corner drugstore, and prescription contraceptives are widely available. Pregnancy discrimination was perfectly legal at the time of Roe; today, it's prohibited by federal law. Women couldn't get credit cards in their own name at the time of Roe; today, it's unquestioned. Marital rape wasn't criminalized in all 50 states until two decades after Roe. And I haven't even mentioned that today, pro-life pregnancy centers outnumber abortion businesses. Using the 1950's to predict a post-Roe future is wildly unrealistic.

Tonya Reaves. Jennifer Morbelli. Maria Santiago. Lakisha Wilson. Christin Gilbert. The list goes on. The pro-life movement can tell stories just as tragic as the "back-alley" stories Flanagan shares. The fact that their abortions were legal doesn't make them any less dead.

I appreciate Flanagan's attempt to engage the pro-life position honestly. It's the best article from an abortion supporter I've seen since Shawna Kay Rodenberg's piece in Salon two years ago. I hope Flanagan will keep digging, keep following her conscience, and become the next convert to the pro-life cause.

Posted by secularprolife.org at 8:07 AM