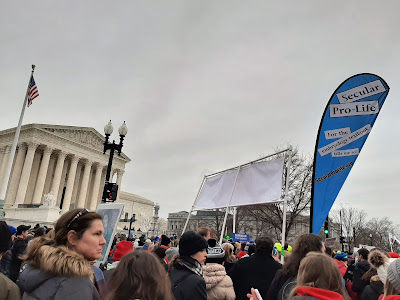 The 2020 March for Life was a huge success. Secular Pro-Life brought our message to tens of thousands of people! Check out our photo album here.

On Thursday, January 23, we exhibited at the Geaux Forth pro-life youth rally organized by Louisiana Right to Life. We have been privileged to enjoy a wonderful relationship with Louisiana Right to Life over the years, most notably presenting at their PULSE youth leadership summer camp. We saw some familiar faces and met many new ones. Students from all over the state spoke with us and took our literature to share in their communities.

From there, we went to a luncheon hosted by Democrats for Life of America. The featured speaker was Louisiana State Senator Katrina Jackson (D-34th District), who discussed her pro-life advocacy. She is, among many other accomplishments, the author of the admitting privileges law that will soon be heard at the Supreme Court. In Louisiana, pro-life elected officials dominate both major parties. Senator Jackson inspired us with the vision of a future where the bipartisan success of Louisiana is mirrored in our national politics. But while we work to achieve that vision, the abortion industry is pouring big money into primary challenges against pro-life Democrats like Rep. Dan Lipinski.

We spent the afternoon and evening in a whirlwind of logistics, but managed to stop by the March for Life Expo to educate ourselves on other organizations' projects.

Friday, January 24 was the 47th annual March for Life. Our 14-foot-tall bright blue banner, bearing the slogan "For the embryology textbook tells me so," is always a conversation piece! Numerous marchers thanked us for being there, photographers from Reuters and other outlets took our photos, and we were interviewed multiple times—most notably by the Federalist, which featured us in this excellent article.

After the March, SPL president Kelsey Hazzard went to record a video for an upcoming Students for Life of America series; we'll let you know when that launches. That evening, we joined our friends at Rehumanize International for our traditional karaoke fundraiser, which was very well-attended; we've outgrown our old house-party venue and held the event in a larger space.

On Saturday, January 25, we exhibited at three student conferences simultaneously: (1) the National Pro-Life Summit, formerly the Students for Life of America conference; (2) an Ivy League student summit, where Kelsey spoke on a panel; and (3) the Catholic-focused Cardinal O'Connor Conference at Georgetown. Campus activists from all over the country took our literature, and we quickly ran out. (If you'd like to help us replenish our supply, please donate!)

All in all, it was an incredible weekend. None of it would have been possible without our wonderful volunteers! Special thanks to Sarah Terzo, Nick Reynosa, Jonathan Reed, Terrisa Bukovinac, Amelia Haynes, Michael Crone, and the Rehumanize International team. You all rock.