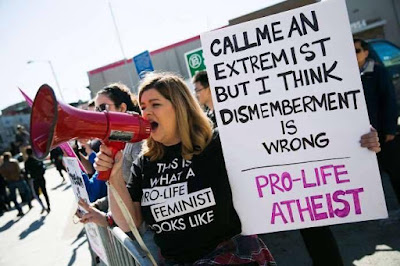 Today, the United States Supreme Court will hear oral arguments in a challenge to Louisiana's pro-life law which requires abortionists to have admitting privileges at a local hospital. Pro-life advocates will rally outside the Supreme Court building in support of the law. One of the rally speakers is Secular Pro-Life's very own Terrisa Bukovinac (pictured). A transcript of her prepared remarks is below, and video is available here.

Kevin Work is a disgraced doctor who’s had multiple run-ins with medical regulators. His license was suspended four times. Eventually his license was reinstated with strict limits: the only type of medicine he was allowed to practice was wound care.

Where does a quack like that go to find an employer who will look the other way? Where else but two abortion centers in Louisiana.

If he’d been screened by a hospital for admitting privileges, the problem could have been uncovered immediately. Instead it fell to pro-life advocates on the ground to investigate who he was and lobby state health authorities to intervene. Who knows how many patients he put at risk in the meantime?

As an atheist, I am proud to support this pro-science law – which holds abortion to the same high standards as other medical procedures.

As a Democrat, I am proud to support this bipartisan law – which was championed by one of my personal heroines, Democratic state senator Katrina Jackson, and signed into law by pro-life Democratic Governor John Bel Edwards.

And as a feminist, I am proud to support this pro-woman law. Honorable Justices of the United States Supreme Court, do the right thing and uphold Louisiana’s law!