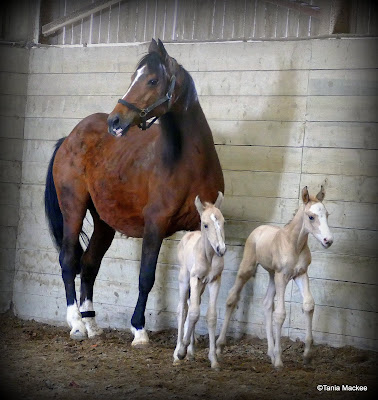 The announcement was certainly easy to miss in all of the virus goings-on, but last month, something quite rare and fantastic happened in the equine world: a British horse farm announced the arrival of a pair of twins! Even crazier, Destiny, the mare (horse mother), had already birthed twins in 2018. Thankfully, Destiny and both of her double sets are happy and healthy.

As a former farm girl and avowed hippie-hick who once lived in the UK, any weird rural news catches my eye. Twins may not sound like a big deal (sheep do it all the time!), but for horses, they hardly ever happen. Because not only are horses simply less likely to conceive twins (at least in most breeds), the vast majority of owners will take drastic steps to ensure that any twin pregnancies finish as singletons.

Yes, horse abortion is a thing, happening as late as nine months into an 11- or 12-month pregnancy.

The primary school of thought in the veterinary world is that the equine uterus is not designed to handle two foals or colts. There is a high possibility of losing one or both, or even the mother. So rather than chance it, most owners abort the smaller, weaker twin (or, as one horse chat room user called it, "the pregnancy that was more convenient"). After all, horses are quite expensive to keep, and stud fees can be up to six figures. Not to mention that horses are often considered part of their owners’ families, and losing a beloved horse is heartbreaking.

Still, one can’t get too excited about an unasked-for invasion of an innocent animal that ends in the death of its offspring — especially when it's done as standard procedure and without indication of maternal or fetal distress. In Destiny's case, for example, the owners repeatedly stressed to media that if they had known she was pregnant with two babies, they would have taken "immediate action in a timely fashion upon the discovery of such."

Translation: they would have "pinched" either the colt or filly, the common equestrian vernacular for abortion. Another way of looking at it: the farm would have been short two healthy, "highly athletic" money-makers.

When I was a teenager, I worked in a livestock office. I got to "know" each horse on paper, paying bills for their feed and training, filing away medical reports and organizing racing or breeding information. One day, I learned one of our mares was pregnant with twins! When I expressed my excitement to a co-worker, however, her face fell. "You know they’re just going to pinch it soon, right?"

The reason it’s called pinching is literal; when detected early in pregnancy, a vet physically pinches the horse embryonic vesicle until it bursts and therefore dies. Later on, vets can choose between the "disturb and dislodge" technique, needles to kill the unlucky twin or physically reaching into the mare and snapping the baby’s neck so it dies a few days later (maybe Gosnell should have been a vet?). Each procedure (especially the later ones) carries a risk to the mare and "wanted" twin.

I’ll never forget how gross I felt when I filed the invoice for the hit on that horse. It simply felt wrong to be forcing an invasive, possibly dangerous procedure on a healthy creature for the sake of money (these horses were not pets; they were earners). It just didn’t seem right to pay a vet to kill instead of heal ("mercy killing" of suffering animals notwithstanding).

Though the comparisons obviously aren’t perfect — domesticated creatures aren’t usually given any choice over their bodies — Destiny and human mothers who are "supposed to" abort have a few things in common:

May Destiny and her fillies and colts live long, happy, full lives — and may the women of the world think of her when told by the powerful that abortion is in their and their children’s best interest.