When polls regarding abortion ask Americans about Roe v. Wade, most people say they want the Supreme Court decision upheld. But when the same polls ask people when they think abortion should be legal, most believe there should be more restrictions than Roe v. Wade actually allows. I've summarized these contradictory results before. Today I was reading a 2019 NPR/PBS Marist poll which captured the same phenomenon.

So
The poll described Roe v. Wade as establishing a woman's constitutional right to abortion, but it did not explain the specifics. Roe v. Wade, along with Doe v. Bolton, made it difficult if not impossible to constitutionally limit abortion in the first two trimesters. (Planned Parenthood v. Casey moved the standard from trimesters to fetal viability, but the situation is largely the same: restrictions in the first or second trimester are difficult to pass or uphold.)

I don't think most people are aware of that level of detail, which may explain why some of the same people who say they support Roe v. Wade also think abortion shouldn't be allowed in some of the circumstances Roe v. Wade specifically mandates.

The same poll asked: Which one of the following statements comes closest to your opinion on abortion?
47% of respondents chose options 4-6, i.e. abortion should be permitted only in the "hard cases," or not at all. Only 29% thought abortion should be allowed after the first three months of pregnancy. 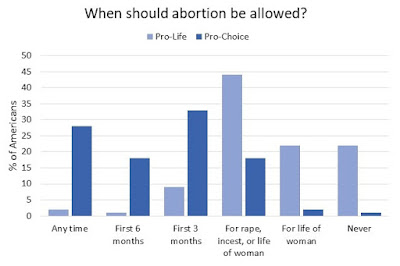 I also wonder how many of them realize that the hard cases account for less (probably much less) than 5% of abortions performed in the U.S. If the data above are accurate, about 1 out of 5 pro-choicers think over 95% of abortions (those performed on healthy fetuses carried by healthy women in pregnancies resulting from consensual sex) shouldn't be allowed.

Also worth noting: contrary to the "old white men" trope, white people tended to be more pro-choice (more likely to support abortion in more circumstances) than everyone else: 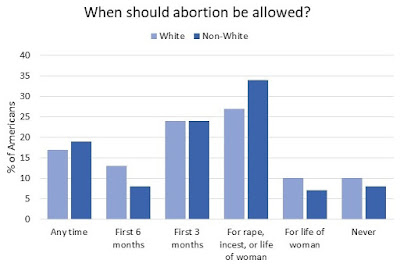 One more interesting tidbit: a full 68% of pro-choicers said they would support a measure requiring abortion providers to have hospital admitting privileges. You'd think such a law would be easy common ground, middle-of-the-road type stuff, but June Medical Services v. Russo suggests otherwise. 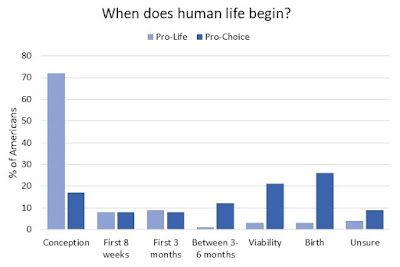 Pro-lifers are relatively monolithic on this (72% said life begins at conception), whereas pro-choice people are much more evenly divided (and twice as likely to say they're unsure). No doubt some of these answers reflect the respondents' philosophical views about when a human becomes a person, as opposed to their understanding of biology (e.g. when an organism is a living member of the species homo sapiens). Still, I continue to suspect that a significant proportion of pro-choice people aren't just conflating philosophy with biology but are actually misunderstanding biology itself. Indeed, a survey of pro-choice people found that if it were common knowledge that a fetus is a biological human, 90% believed abortion rates would decrease and 83% believed support for legal abortion would decrease.

This NPR/PBS poll was filled with information suggesting that the legal status quo for abortion in the U.S. is actually pretty dramatically at odds with what most Americans think makes sense. So how did NPR cover the poll?