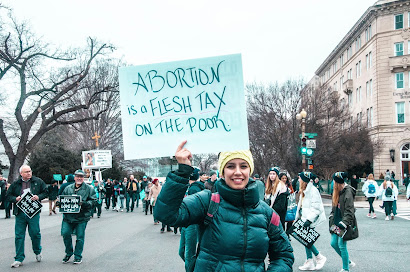 We recently posted on the Secular Pro-Life facebook page:

An author working on a book about political engagement asked: "Conservatives I speak with often blame the federal government for a lot of social problems, while liberals tend to blame capitalism. Viewing the issue of abortion from a systemic standpoint, what are the institutional sources of this problem?"

After telling him that volumes could be written on that question and giving him an academic lead, I answered: "Blaming the federal government or capitalism is too simplistic; we've long lived with both, and yet abortion rates have varied tremendously over the years. We know that the most common reasons women give for seeking abortions are financial—and pro-life organizations do a lot to try to ease those financial burdens, which often saves lives—but that can't be the whole story either, beause children outside the womb are expensive too, and yet low-income mothers don't kill their older children a million times a year. It's complicated. Government refusal to recognize prenatal rights, corporate failure to provide adequate family leave, poverty, lack of health insurance, cultural acceptance of dehumanization (i.e. "clump of cells"), social shaming of pregnancy in teens and unmarried people, fear mongering about disabilities, foregoing or misusing contraception, predatory men abandoning their responsibilities... all these factors and many others play a role."

What additional factors can you think of? And if you could change just ONE thing to prevent abortions, what would it be?

An excellent conversation ensued. In no particular order, here are a few comments that caught our eye.

Krystal W.: I think the culture around pregnancy needs the most change. Stop telling women and men that they can't do things when they have children. Every time they say that, I think of someone I know who did those exact things. Can't go to school and be pregnant, can't get a good job, can't have a social life, can't be happy, can't retire, can't afford it (because yes kids can be pricey but guess what poor people have always had the most children and it works out), etc.

Leette E.: EDUCATION. Our continued failure to provide all children with comprehensive sex education which should include embryology and prenatal development is a huge part of the reason abortion is still an issue.

Victoria R.: More 👏🏻Paid👏🏻Parental leave👏🏻 At his first job my husband didn’t even really get any sort of family leave at all. Now he gets 16 weeks paid! Definitely looking forward to that aspect of baby #2 waaaayyyyy more

Crystal K.: I would change the way that society views women's bodies. Pregnancy is not a disease that the woman needs rescued from, nor are babies tumors that need removal. Pregnancy, in fact, is an indicator that women's bodies are doing exactly what they were designed to do. Men are NOT the ultimate standard to aspire to physically, and we shouldn't have to change our physiology to match theirs to be accepted in society.

Abigail H.: Stop viewing human beings as objects. Women aren’t objects for pleasure. Babies aren’t clumps of cells in the womb. We, as individuals, are not cogs in the machine. When we truly respect the dignity inherent in human life, we may be able to move past viewing human bodies as commodities.

Chrysten C.: Birthing a child in a hospital should cost less than an abortion. Unfortunately, when one is financially struggling, that comparison between a few hundred and thousands is a practical deterrent.

Elizabeth B.: White male business leaders say that women need legal abortion to achieve economic parity. This is only true because they disproportionately control the business world and they do not want their employees to have maternity leave, time off to care for sick children, flexible work schedules, etc. And to the extent they can minimize women taking maternity leave, they can also justify the lack of paternity leave policies. These a**hats see children only as impediments to profits.

Mark K.: I know it sounds old school, but teach young men how to be responsible!

Posted by secularprolife.org at 8:29 AM

Email ThisBlogThis!Share to TwitterShare to FacebookShare to Pinterest
Labels: we asked you answered, whole life issues