Register here for our Out of Hyding virtual rally on September 30 at 9pm Eastern!

The Hyde Amendment, which prevents federal taxpayer funding of most elective abortions through the Medicaid program, may be the pro-life movement's single greatest achievement. Since its enactment on September 30, 1976, it has saved the lives of over 2.4 million low-income Americans. Odds are very good that you know someone who is walking around today thanks to the Hyde Amendment.

But where we see precious human lives, the abortion industry sees over a billion dollars in lost revenue (using an average of $508 per abortion). The Hyde Amendment is under serious threat. Democratic leaders have signaled their intent to break with decades of bipartisan tradition and refuse Hyde Amendment protections in the next federal budget. Democratic presidential candidate Joe Biden was a supporter of the Hyde Amendment until very recently, but cowardly flip-flopped under pressure from abortion extremists in his party.

It's usually bad politics to imply that millions of your constituents should have been killed on Uncle Sam's dime. Anti-Hyde politicians get away with it because many of the people whose lives were saved by the Hyde Amendment are too young to vote. Many also belong to marginalized communities. We must amplify the voices of Medicaid kids and stand up for their dignity as human beings!

In September 2016, Secular Pro-Life organized the #HelloHyde campaign to mark the 40th anniversary of the Hyde Amendment. But we have grown so much in the past four years that many of our supporters weren't around at the time of that campaign (an excellent problem to have!). So we are pleased to announce that we are renewing our commitment to Medicaid kids, inside and outside of the womb, with an Out of Hyding virtual rally on Wednesday, September 30! Speakers will share their personal stories, celebrate 44 years of life-saving, conscience-respecting federal policy, and provide action items to keep the Hyde Amendment secure for the next generation.

There is no doubt that lives are on the line. In places that have undermined Hyde by subsidizing abortion with state (rather than federal) taxpayer funds, the abortion rate has tragically increased. We must stop the abortion lobby from scaling that tragedy nationwide. Register for the Out of Hyding virtual rally today!

Once you've registered, be sure to RSVP to our Facebook event and invite friends, and use the Out of Hyding profile frame and the hashtag #OutOfHyding to support the cause! 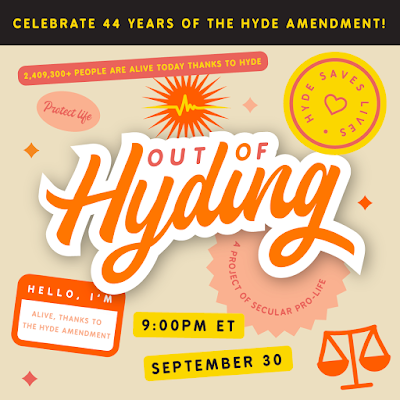 Posted by secularprolife.org at 12:29 PM