[SPL recently received this note of encouragement from one of our supporters, and she gave us permission to publish it as a blog post.] 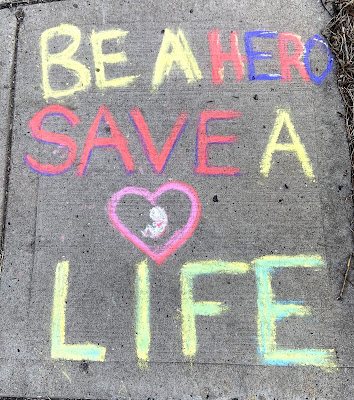 Photo credit: Evie Schwartzbauer
My name is Billie. I am a gay woman and my husband, Alan, is a transgender men, so we both grew up immersed in adamantly pro-choice social circles (as is common in the secular LGBT community). We held radically pro-choice views ourselves until early adulthood, and argued for abortion rights online, etc. I was whole life pro-life in most other areas (anti-death penalty, pro-social supports for struggling parents, even vegan), but not so with abortion.

In my first year of university, I saw some pro-life chalking on the wall outside the campus cafeteria. Specifically it was a statistic about the proportion of children with Down syndrome aborted. At first I dismissed it as a lie or at least exaggeration; I’d been taught to expect that most claims pro-lifers make are lies. I don’t remember what made me pause and do some research, but I was horrified to learn the statistic was true. I had worked with special needs kids my entire life (as had my mother), and I felt they already had enough working against them.
[Related post - When she got a prenatal Down syndrome diagnosis, her doctor wouldn't stop suggesting abortion.]

It was a few months before I could bring myself to look up any more information. When I did, I learned more I had been misled about or had been wrong about. I was going through a paradigm shift.

This new knowledge made me really open to different perspectives. I started following both pro-choice and pro-life blogs. I saw more and more claims that both shocked me and were verifiably true. Previously I hadn’t seen ultrasound images or pictures of aborted fetuses. I didn’t know many of the statistics surrounding abortion. It was an eye-opening experience. Additionally, as I watched others debate online, I noticed pro-life advocates interacted with people with much more love and grace than the pro-choice people they were debating. (I know that's not necessarily true everywhere, but it was my experience.)

I had a traumatic childhood and grew up very cynical; I didn’t see much worth living for. But as I found my faith, developed secure relationships, went to therapy, etc, that pessimism started to change, and I came to view life as very precious and fragile. As I learned more about abortion, I would share with Alan, and it didn't take long for him to have a change of heart too.

Since then we've been advocates. We were involved in the pro-life club during and after university. We went to the annual March for Life with a "We're Here, We're Queer, We're Pro-Life" sign (the time we had tomatoes thrown at us!) 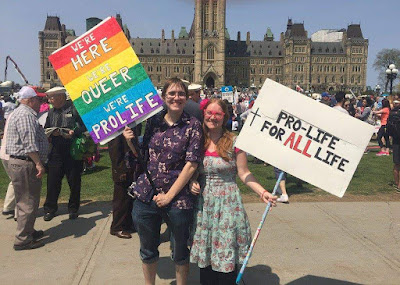 We have several SPL bumper stickers on our car today. We genuinely think SPL has the most effective messages. You focus on science, common sense, and inclusivity. We feel welcome and accepted in your group, and we are so grateful. Secular Pro-Life is absolutely essential to the conversation, so thank you!
[Help spread pro-life messages by creating some chalk art yourself. Read more here, from HowToBeProLife.com.]
Posted by M at 7:24 AM

Email ThisBlogThis!Share to TwitterShare to FacebookShare to Pinterest
Labels: her story, LGBT, march for life