Tomorrow: Save Hyde Day of Action! 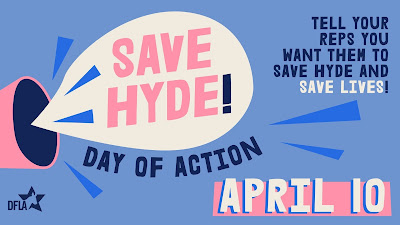 Today at the National Press Club, a coalition led by our very own Terrisa Bukovinac (in her role at Democrats for Life of America) will hold a press conference promoting tomorrow's Save Hyde Day of Action. Terrisa's prepared remarks follow. Action events are taking place in 20 cities nationwide; find the one closest to you here.

Every year for forty-five years, Congress has passed the Hyde Amendment with consistent bipartisan support. The Hyde Amendment stops taxpayer money from funding abortion in government health programs. This common sense measure protects the consciences of the majority of Americans—not only people of faith, but also atheists like myself—who do not want their hard-earned money to destroy human life.

The Hyde Amendment is also one of the most effective abortion prevention policies we have. To date, the Hyde Amendment has saved the lives of over 2.4 million Americans. This is personal. I know people who are alive today because of the Hyde Amendment. Statistically, you probably do too. These are our neighbors, family members, co-workers, and friends.

But where we see precious human beings, the abortion industry sees billions in lost revenue. The Biden Administration’s despicable attack on the Hyde Amendment is an attack on the most vulnerable among us: babies conceived in low-income families.

Gallup polls consistently show that low-income people are more pro-life than the wealthy, and people of color oppose abortion more than white people. If it were up to the communities most impacted by the abortion industry, the Hyde Amendment would not only be safe in this year’s budget: it would be made permanent. We know that repealing the Hyde Amendment isn’t about racial or economic justice. That’s a cynical ploy. What’s really going on here is simple: with abortion rates at record lows, and abortion centers shutting down left and right, they’re looking for a government bailout to keep their deadly business afloat!

Already, Democrats in Congress failed to include Hyde Amendment protections in the COVID relief bill. They have irresponsibly allowed abortion businesses to exploit funding that should have helped Americans survive the pandemic. That is outrageous.

The American people do not support taxpayer funding of abortion. When Democratic officials abandon their decades-long support for the Hyde Amendment, and cave to abortion extremists, they will feel the pain at the ballot box.

Tomorrow, April 10, is the Save Hyde Day of Action. Across the country, people of all political persuasions, of every faith and none, will hold demonstrations to support the Hyde Amendment. This is just a first step in holding politicians accountable. We will not rest, and we will not be silenced. We will keep proclaiming the truth: the Hyde Amendment saves lives!