Projects
Athiest Terrisa snuck into the Fight for Life and Faith rally in Washington DC to challenge the clergy to use their unique positions of influence among the faithful to fight for protection of the most vulnerable humans: the unborn. Breitbart picked up her passionate speech here.

In case you missed it, the panelist discussion Terrisa was featured in, "Birth Control Bedfellows: A Discussion with Unsung Heroes for Better Contraceptive Access" has finally been uploaded.  You can watch it here.

Kelsey has written an article for the Human Life Review on the upcoming Supreme Court case regarding a 15-week abortion ban. Stay tuned as that becomes available in July.

Monica has been hard at work managing SPL's social media accounts. If you are looking for a short, succinct way to pass the pro-life message along, check out our Twitter account in particular.

Nobody should be allowed to kill prenatal humans in 140 characters or less. See the original tweet here.

Twitter
For June we gained 198 new followers, bringing us to 14,079 total. We sent 161 tweets, which were viewed 463,500 times, including this tweet from Kelsey, viewed over 29,500 times, getting the point across that finishing off the job of killing your victims is not better than having survivors around to speak out against your cruelty. 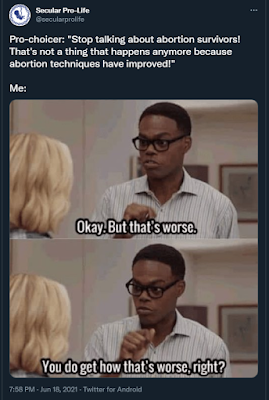 Facebook
We are at 35,297 followers on Facebook. Our content was viewed 326,849 times, including 37,312 views of this post about the toxic culture among too many doctors that any child less than perfect deserves death before they are born. 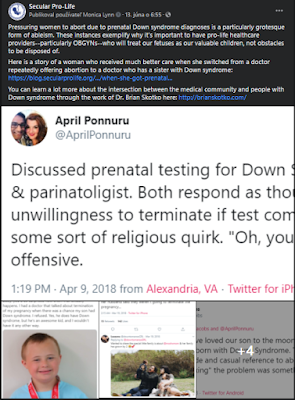 See the related blogpost here.
Blogger
Posted by Kara at 9:14 AM