Reverse Roe to Support Separation of Church and State 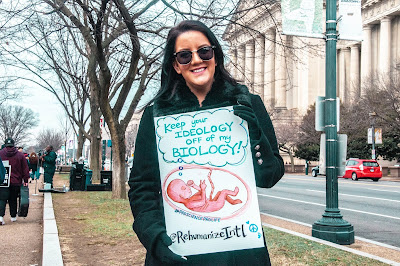 Human Life Review recently published a special issue concerning Dobbs v. Jackson Women's Health Organization, the abortion case which Supreme Court observers hope will be the means to reverse or weaken Roe v. Wade. Secular Pro-Life President Kelsey Hazzard was honored with the opportunity to contribute to the special issue, and her article is reprinted below. The full issue is available online here, and you can subscribe to Human Life Review for a print version.

Dobbs v. Jackson Women’s Health Organization presents the Supreme Court with an opportunity to save countless lives from the violence of abortion. That is, of course, the primary reason the Court should reverse Roe v. Wade and Planned Parenthood v. Casey.

There is a secondary reason, however, which I wish to explore here: reversing Roe and Casey will correct an egregious violation of the separation of church and state.

For decades, the abortion industry and its lobbyists have advanced a false narrative that the pro-life position is inherently religious. Speaking as a pro-life atheist, that is hogwash. In fact, nearly 13 million religiously unaffiliated Americans oppose abortion. We accept the overwhelming scientific consensus that human life begins at fertilization.

Scientific consensus, not religion, should inform government policy. But the Justices who decided Roe v. Wade paid no heed to that laudable principle. They relied heavily upon religion and pseudoscience to muddy the waters and strip unborn children of legal recognition:

We need not resolve the difficult question of when life begins. When those trained in the respective disciplines of medicine, philosophy, and theology are unable to arrive at any consensus, the judiciary, at this point in the development of man’s knowledge, is not in a position to speculate as to the answer.

It should be sufficient to note briefly the wide divergence of thinking on this most sensitive and difficult question. There has always been strong support for the view that life does not begin until live birth. This was the belief of the Stoics. It appears to be the predominant, though not the unanimous, attitude of the Jewish faith.

. . . The Aristotelian theory of mediate animation, that held sway throughout the Middle Ages and the Renaissance in Europe, continued to be official Roman Catholic dogma until the 19th century, despite opposition to this ensoulment theory from those in the Church who would recognize the existence of life from the moment of conception. The latter is now, of course, the official belief of the Catholic Church. As one brief amicus discloses, this is a view strongly held by many non-Catholics as well, and by many physicians.

The Court treated the Stoics, Jewish scholars, Aristotle, and modern-day physicians as equally valid, competing sources of wisdom on the question of when a human life begins. They are not. No offense to Aristotle, but he never saw a sonogram. The Stoics lacked the benefit of the scientific method. If the Court had a robust respect for the separation of church and state, the disciplines of philosophy and theology would not have warranted consideration. The Supreme Court would have followed modern medicine—and Roe would have been a very different opinion.

It’s worth noting that Roe primarily cites beliefs from Western traditions. If the Court had expanded its horizons a bit, the fallacy might have been easier to spot. For instance, Malaysian folklore holds that a child lives for forty days in its father’s womb, located in his brain, before making the journey to the mother’s womb. Among the Arapesh of Papua New Guinea, it was believed that baby-making required repeated acts of intercourse during the first few weeks of pregnancy. Neither of those beliefs is any more wrong than the “preformationist” hypothesis of 17th-century Europe, which held that each sperm contained a tiny child, called a homunculus. (You may have noticed echoes of that belief from pro-choice internet trolls who say that if abortion is murder, masturbation is a holocaust.) Perhaps we should count ourselves lucky that the Supreme Court didn’t cite Spartan philosophy, which encouraged infanticide.

All of those beliefs were potentially defensible in the times and places they arose. But we know better now. My life, your life, and the life of every powerful person in a black robe began when an egg cell fused with a sperm cell.

Alas, the Court’s privileging of supernatural nonsense to justify abortion only worsened in Planned Parenthood v. Casey, when Justice Kennedy infamously declared that “at the heart of liberty is the right to define one’s own concept of existence, of meaning, of the universe, and of the mystery of human life.”

We have freedom of thought in this country. You’re at liberty to believe whatever you want to believe. You can believe the earth is flat; we’ll all judge you for it, but it’s not illegal to believe it. But if your belief that the earth is flat leads you to ignore the curvature of the earth while you’re navigating an airplane, we have a problem. And if a person’s subjective beliefs about the “mystery of human life” are allowed to trump laws against killing other people, that’s not liberty. That’s oppression.
The evidence for life before birth is overwhelming. Knowing what we now know, the denial of life’s existence in the womb amounts to a religious doctrine—and a particularly destructive one. It has no place in a civilized legal system.
The law at issue in Dobbs prohibits abortion after 15 weeks. There is no avoiding the fact that a 15-week-old in the womb is alive: not merely a “mystery” or “potential life,” but a living person with recognizably human features. Indeed, a 15-week law is rather modest by international standards. It’s high time for the Court to accept the science and restore church-state separation. It’s high time for the Court to reverse Roe and Casey.

P.S.: Kelsey's article is adapted in part from a lecture she gave at Yale a few years ago, which you can watch here.

Posted by secularprolife.org at 7:57 AM