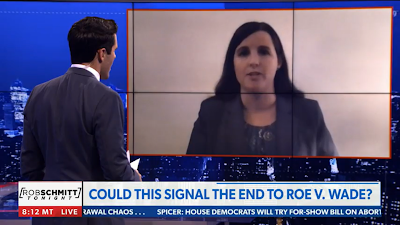 On the evening of Thursday, September 2, Secular Pro-Life President Kelsey Hazzard — who happens to be a lawyer — appeared on Rob Schmitt Tonight to discuss the Texas heartbeat case. You can watch the video here (starting at 8 minutes, 30 seconds). A transcript of their conversation is below.

Schmitt: For more on this let's bring in Kelsey Hazzard, attorney and founder of Secular Pro-Life. Kelsey, thank you so much for coming on, it's good to see you.

Hazzard: Thank you so much for having me.

Schmitt: So you guys are a pro-life organization that is secular, it's not based on any religious ideals, it's just how you guys, I guess, feel about this issue. The Supreme Court did not weigh in on whether the law is constitutional. And I think that has everybody scratching their heads, on both sides. Why do you think that is?

Hazzard: Well, that's correct. I think that the majority of the Supreme Court, the five... let me take a step back. This will be easier to understand if you have a basic knowledge of how these cases usually go. Usually what happens is that an abortion law is passed, immediately some abortion industry group will file a lawsuit, and then one of the lower federal courts — either a district court or a circuit court — will block the law while the lawsuit is pending. And the Supreme Court doesn't get involved until much later, if at all.

Hazzard: But what happened here is that the lower courts did not block the law, and so the abortion industry groups were at the Supreme Court, asking the nine robed Justices to intervene at a very early stage of the lawsuit, and that was procedurally quite unusual, and the five who ruled in the majority said "We're not going to do that at this point."

Hazzard: The four in the dissent had some very angry dissents; they would have discarded the procedure and gone full steam ahead to resume abortions in Texas. So those four made it very clear what their bias is; they are never going to be open to correcting the Court's error in Roe. But the other five are leaving their options open.

Schmitt: Understood. I mean, when I look at this — I actually called Alan Derschowitz before the show just to get somebody, because I'm not a lawyer — I look at this and you think about the fetal viability ruling, which is that it has to... they're legal up until the baby could survive outside of the womb on its own, theoretically, which is something like 24 weeks. When you look at the Texas Act, the Texas law, now, at 6 weeks, it does on its face just seem patently unconstitutional. Give me your perspective on that.

Hazzard: Well, it's certainly a challenge to Roe v. Wade's interpretation of Constitution.

Hazzard: You know, our position, and certainly the position of legislators in Texas, is that Roe v. Wade and Planned Parenthood v. Casey were departures from the Constitution, and so this is an opportunity to reflect modern science. You know, fifty years have gone by since Roe. Roe was decided in a time when sonograms were not prevalent; when, you know, the experience of going to the first prenatal appointment and having the Doppler and hearing the heartbeat, that was not common. We've advanced quite a bit and it's time for our laws to reflect that. So that was what the Texas legislature was trying to do.

Schmitt: Understand. Yeah, this to me has just always been a fascinating conversation on both sides of this thing. And I don't have any skin in this game. But is it true that Ruth Bader Ginsburg did not think that Roe v. Wade was constitutional?

Hazzard: She of course agreed with the result in Roe v. Wade, she was very pro-abortion, but she had some criticisms about the way that Roe v. Wade was written and the way that they tried to connect it to the text of the Constitution, which was very sloppy and has been criticized on both the left and right.

Schmitt: Understood. And where do you think this thing goes from here?

Hazzard: Well, it's difficult to say. You know, in addition to the Texas law, there's also a major Supreme Court case coming up that your listeners may be aware of, which is the Dobbs case, and that concerns a 15-week ban. So we've got various points in pregnancy being presented to the Court, and they have different opportunities for how they can approach this, potentially to either overturn Roe entirely or kind of go in stages, backing off from the extremism of Roe.

Schmitt: Okay. Attorney and founder of Secular Pro-Life, Kelsey Hazzard, thank you so much for taking the time, for clarifying some of that. We appreciate it.

Hazzard: Thank you very much.

Posted by secularprolife.org at 6:19 AM