Study: Women explain their abortions more in terms of religion and motherhood than autonomy.

The pro-choice position has long focused on the role religious fervor plays in anti-abortion politics. Images of nuns marching with anti-abortion protestors are splashed across our front pages, and video clips of evangelical men with megaphones and Bibles protesting outside of clinics are ubiquitous online. It seems all but a forgone conclusion that an individual’s faith connects him or her to an anti-abortion ethic. A recent case study out of UC Davis, however, proposes faith can often be the foundation for choosing to have an abortion. Sarah Larissa Combellick, PhD student in the UC Davis school of sociology, conducted the case study “My Baby Went Straight to Heaven”: Morality Work in Abortion Online Storytelling. This study examined how women report their abortion experiences via social media platforms dedicated to abortion-related issues. She discovered people justify choosing abortion more often by using concepts of how we view religion and women’s places in society than by using traditional pro-choice concepts regarding autonomy.

Based on previous work featuring personal narratives, particularly the morality work of Jenny L. Davis, PhD, Ms. Combellick’s study collected data from “My Abortion, My Life,” a website hosted by the Ohio Abortion Clinic, Preterm. Expecting to see responses mirroring traditional pro-choice tropes, particularly “my body my choice,” she instead noted a trend of reframing the conversation and using religion to justify the decision to terminate a pregnancy. Only 1/4 of women used the traditional reasoning, while 2/3 (including some who also referenced autonomy) reframed their stories in the context of religion or social expectations for women – usually expectations supported by a history of religiosity. The two most common morality-related themes were as follows:

Contributors to “My Abortion, My Story” re-moralize their personal narratives; they make their decisions seem like the only rational choice according to society’s unspoken rules -- in this case using how we interpret religion and/or women’s roles in society based on cultural tradition. Ms. Combellick also noted findings of abortion stories from her study were similar to findings highlighted by previous studies in terms of accepting blame: in particular, many women denied their own agency in making the abortion decision by placing the blame on the shoulders of parents and/or partners.

While Ms. Combellick did not note this specifically, adopting identities where victimization and sacrifice are primary themes seems to be key in re-moralizing work in terms of abortion. Women synthesize those identities while avoiding disparaging the act of abortion by invoking a higher moral good. The idea of taking on their unborn children’s suffering, and of sacrificing a life with them, can be easily woven into the fabric of extant religious traditions – particularly Christianity, which as a core tenet holds self-sacrifice as the highest good. By adopting this attitude and applying it to their abortion decision they find the perfect medium to justify the abortion, thus transforming their narratives from those of social deviants to those of valuable members of society, capable of conforming to the status quo.

While the study is small, it suggests shifting the conversation away from choice and autonomy and focusing on the overall moral implications of abortion -- the intentional killing of a living human being – may be a more fruitful activism tool for both religious and secular anti-abortion advocates. It certainly illustrates the need to acknowledge a pro-choice position as more entangled with deeply held religious beliefs than we may have previously understood. As Ms. Combellick’s study shows, religion can be used as a tool to justify a woman’s choice to abort almost as easily as it can be used to denounce the act. 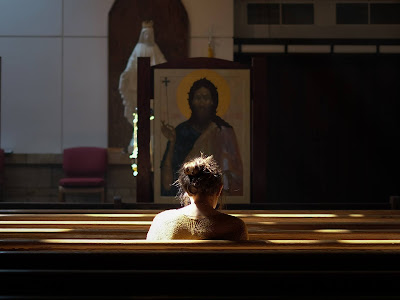 Photo credit: Josh Applegate with Unsplash
[Today's guest author is Sarah St. Onge, who writes about child-loss, grief, and issues pertaining to continuing a pregnancy after a lethal anomaly has been diagnosed. You can read more of her work at shebringsjoy.com.]
Posted by M at 6:00 AM